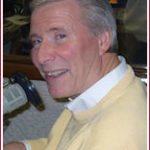 Dan Kayser was born in 1944, in Zanesville, Ohio. He attended his first year of grade school in a one-room schoolhouse in East Lynn, Missouri. Dan grew up in a Christian home and attended the Lutheran Church.

He attended school in Willard, Ohio, where he graduated from high school in 1962. Twelve days after his graduation he took tests to enlist in the Navy, intending to join the Navy U.D.T. (Underwater Demolition Team) which was the precursor of today’s Seals.

On the way home his best friend and Dan were involved in a one-car freak accident which left him totally paralyzed. This accident was destined to change his life forever. He was rushed to a major hospital in Cleveland, Ohio. The neurosurgical team saved his life, but told his parents that he would be a living vegetable and confined to a bed for the rest of his life. Although always a Christian, it was during this period that Dan rededicated his life to the Lord.

For the next seventeen years his parents helped him exercise and strengthen his body. He studied Amateur Radio and received his FCC license in 1975. He enjoyed this international medium of communications and it was this hobby that helped him strengthen his lungs, voice and speaking ability. In 1977 he put hand controls on his parent’s car and learned to drive once again. In 1979 he received his first van, which gave him new-found freedom. He joined Olde Worlde, Inc. (a multi-million dollar international corporation) as a field representative and developed one of the fastest growing sales forces in north-central Ohio.

In 1984, he joined WYAN Christian Radio in Upper Sandusky, Ohio. He worked as a DJ and developed his own program called, “KNOW YOUR BIBLE.” When the station went off the air, he accepted a position with Betty Jane Industries in Tiffin, Ohio, representing the Ohio Department of Natural Resources, Division of Litter Prevention & Recycling in Seneca County.

On March 17, 1989, he married the former Linda Patton and they made their home in Carey, Ohio. During their marriage, Dan and Linda had many mountain-top and valley experiences. Dan came within hours of losing his life to a gangrene-filled gall bladder in 1990. Dan and Linda were deeply involved in coordinating efforts to put Christian Radio back on the air in Wyandot County. They both were invited to Washington, DC, where Dan was asked to speak before 4,000 people attending the National Religious Broadcasters Convention in January of 1992. Dan and Dr. Charles Stanley actually filled in for President Bush, who had a conflict in his schedule and couldn’t make his scheduled address at the Tuesday morning Presidential breakfast.

It was during this period that Linda was developing a slight cough. That cough turned into a far more serious condition than either of them could have imagined. Linda was rushed to the hospital April 8, 1992. Two days later, she was diagnosed as having a very rare form of lung cancer. After seven weeks of progressing illness, she died on June 3, 1992, while Dan was holding her hand. This time period was the deepest valley and saddest point of Dan’s life.

Since Dan and Linda were co-founders of WXML, Dan felt it was more important than ever that he should devote all of his energy and time to make sure that their mutual dream and vision of the Christian Radio Station would become a reality. So Dan and the Officers and members of the Board of Directors worked even harder in the fulfillment of their vision. After many setbacks and hurdles, WXML went on the air December 26, 1992.

Miracle after miracle happened as God began blessing the efforts of all those who were working to put this radio ministry on-the-air. One of the biggest blessings to Dan was when the Lord brought the former Susan Mayer from Paulding, Ohio, into his life. Having been friends for several years, it was evident from the very beginning that God was doing something very beautiful for Dan and Susan. They became engaged during the Christmas holidays of 1993, and were married on July 30, 1994. They now reside in Findlay, Ohio.

Dan devotes all of his energies in fulfilling the dream that God gave him many years ago to promote and further Christian Radio in Northwest Central Ohio. One man’s dream has now blossomed into a ministry which is touching thousands of lives.