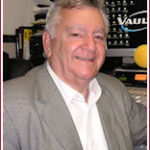 I was born and raised in Clarksburg, West Virginia. My wife, Miriam, and I have been married for 26 years and have one son, Roger, and 30 nephews and nieces, of which several have been an important part of our personal family life.

For the past 30 years, I have owned and operated a Miracle Ear franchise that covers five counties. We have offices in Mansfield, Lorain, Elyria and Sandusky. Three of these offices are in Sears stores.

I received Jesus Christ in my heart at the age of 16 years at the Italian Christian Church of North America in Clarksburg, West Virginia. My first pastor, R.L. Corsini is still living today at the age of 93.

During my four years in the Air Force, I served an an Engine Specialist. I also traveled for the Air Force baseball team while stationed in Oklahoma and Virginia. At that time, I had drifted away from the Lord and compromised my life and walk with the Lord. I rededicated my life to the Lord Jesus at the age of 31.

In 1975, I became involved with Full Gospel Businessmen and served as President of the Mansfield Chapter, as well as Field Representative for three chapters, for those 12 years. At a Full Gospel Businessman Banquet in 1977, I received the infilling of the Holy Spirit with evidence of speaking in tongues. The gift of the Holy Spirit gave me a boldness and zeal that I never had in my life before
(Acts 19). Because of a greater desire and this boldness, I have been able to witness to people and be a better example in my walk with Jesus.

I was approached by Dan Kayser to be on the Board of Directors for a radio station that did not exist at the time. That’s faith in action, at its best! God gave Dan Kayser the vision; and Dan implemented it. God honors faith every time, especially when faith is mixed with action.

For many years, I have been involved with Promise Keepers, an organization which has seen 62,000 men of all races, colors and creeds coming together to worship and praise Jesus Christ our Savior. Because of one man’s vision, Coach McCartney, the former head football coach of the University of Colorado, we have seen growth from a few men meeting in Colorado in 1990, to 750,000 men in 1995, gathering in stadiums all across the United States of America. God is interested in our availability instead of our abilities. Revivals are happening in mens hearts to be better husbands, fathers and sons, to be more vocal in their communities about Jesus Christ; and to breakdown the denominational and racial walls. Like the scripture in Galatians 6:9, encouraging us to not give up, my word to you is “Don’t Quit!”