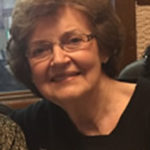 I was born and raised on a farm in Southeast Indiana. My parents, Leonard and Laura Hunter Fox moved from Kentucky to Indiana shortly after the married. I am the seventh of ten children, born to this Godly couple, who always made sure we were all in Sunday School and church. We were a singing family. Both Mama and Daddy attended singing school learning the basics of music theory and the Do Re Mi’s of convention style singing. Their love for music was passed on to all of their children. My earliest recollection of singing was when I was five years old. One cold winter morning while the older siblings were in school, Mama was singing the song “I will Meet You in the Morning”, I joined in with her on the chorus singing the alto part. Mama was ecstatic, she called me her “little alto girl”. My oldest brother, a minister, had a radio program in Hamilton, Ohio. The two older sisters and I would often sing on his broadcast. We soon were invited to sing at other churches. I was so small, I had to stand on a box. How excited I was when people would slip pocket change into my hand. I was saved when I was ten years old and at an early age, I felt God’s call for Christian service.

After high school, I moved to Jackson, Tenn. While there, I sang in a ladies trio and the church choir. All my life I’ve been active in church singing, playing piano and working with the youth. After moving to Ohio, My husband and I traveled and sang with a quartet for several years. We recorded four long play albums and sang in concert with some of the most notable names in Southern Gospel Music.

In 1975 the group disbanded and we moved to Western Pa. It was there my world suddenly fell apart. I was facing the awesome responsibility of single parenthood. God became more real to me than ever in my life. I learned to live by faith. “Jesus Never Fails!”

On November 25, 1988, Dave and I married. My son, Rob, had graduated and was attending Liberty University. The youngest, Ryan, was a sophomore in high school. My daughter, Rhonda, her husband and two children were living in Galion. After moving back to Galion, I organized and sang with New Bethel for five years. Dave has been very supportive of all my endeavors in Southern Gospel music. My love for Southern Gospel music has never changed. How thrilled I was when Bob Nachbar called and asked if I was interested in becoming a DJ on NewVision FM. I began hosting Solid Gospel in January 1998. I am very grateful to Dan Kayser and the board of directors for giving me the privilege of again sharing the Gospel through music. My life’s verse is: Romans 8:28; “we know all things work together for good to them who love God, to them who are the called according to His purpose”.